Members of the School of Nursing community are reminded to stay safe during Fall Break (Oct. 11-12, 2021) and help fight the spread of COVID-19. 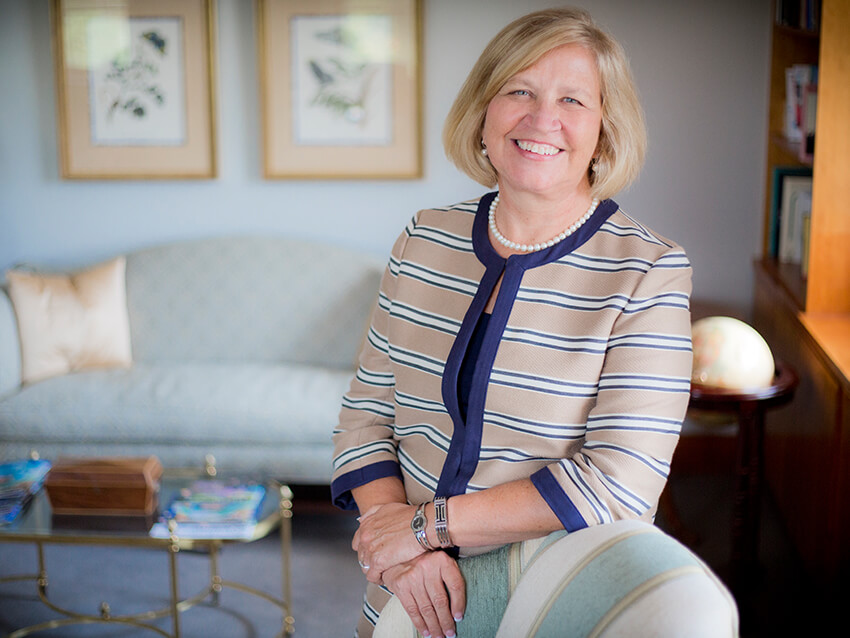 Linda A. McCauley, PhD, RN, FAAN, FAAOHN, began her appointment as Dean of the Nell Hodgson Woodruff School of Nursing (NHWSN) in 2009. She has since developed and executed a comprehensive strategic plan to position NHWSN at the forefront of nursing research and policy. Under her leadership, the school has risen from its No. 26 ranking in 2011 to its current position as No. 5 in US News and World Report’s “Best Graduate Nursing Schools” guide.

Dean McCauley is a thought leader at the intersection of environmental science and nursing. She is an advocate for worker’s rights, occupational health, and environmental protections, and she has been called upon for Capitol Hill testimony regarding these issues. Her research, which analyzes the health effects of environmental factors like climate change, draws together several disciplines and utilizes innovative methodologies.

In 2015, she secured the largest NIH research grant in the school’s history—$5 million to develop the Children’s Environmental Health Center at Emory. She is the Co-Chair of the National Academy of Medicine’s Committee on Primary Care and, in 2020, she was accepted onto the EPA’s Children’s Health Protection Advisory Committee (CHPAC).

Dean McCauley was inducted into the Sigma Theta Tau International Nursing Hall of Fame in 2016 and is a Fellow of both the American Academy of Nursing and the American Academy of Occupational Health Nurses. She is a sought-after subject matter expert with features across nationally syndicated outlets such as Time, NPR, The Weather Channel, Huffington Post, and Businessweek.

Tricia Benson is the Chief Engagement Officer for the Nell Hodgson Woodruff School of Nursing. In this role, she will cultivate and champion strategic partnerships, advance collaboration, oversee special projects, and seek philanthropic opportunities that advance the mission and strategic priorities of Emory University's Nell Hodgson Woodruff School of Nursing (NHWSN). The initial project includes the renovation of 250 Ponce de Leon in Decatur to include simulation facilities and initiatives in partnership with Emory Healthcare nursing leadership.

Tricia earned a master’s degree in nursing from the Nell Hodgson Woodruff School of Nursing and a bachelor’s degree in nursing from Vanderbilt University. Earlier in her career, Tricia held several roles at Children’s Healthcare of Atlanta including the Director of the Aflac Cancer and Blood Disorders Center. Over time, Tricia developed successful fundraising skills and moved into philanthropy. Most recently she worked for the national office of the Cystic Fibrosis Foundation as Senior Director of Planned Giving, Annual Fund and Direct Response. Her other roles include Director of Foundation Relations and Planned Giving at the Human Rights Campaign and Program Director at Camp Sunshine.

Tricia lives in Decatur, Georgia with her wife Amy and two children, Riley and Will.

Dr. Clevenger, gerontological nurse practitioner, is the Associate Dean for Transformative Clinical Practice with oversight responsibility for the Office of Clinical Affairs, the Emory Nursing Experience, and the Integrated Memory Care programs at the Nell Hodgson Woodruff School of Nursing. She most recently served as Associate Dean for Clinical and Community Partnerships. She is a nationally recognized educational leader in advanced practice nursing and in geriatrics and gerontology. She is a Past President of the Gerontological Advanced Practice Nurses Association, Fellow of the American Association of Nurse Practitioners (AANP) and the Gerontological Society of America, and contributor to the AANP Certification Program. She is Clinical Director of the nurse-led patient centered medical home for people living with dementia, the Integrated Memory Care Clinic (IMCC). IMCC represents an innovative clinical model that provides memory and primary care in a single integrated model for people living with dementia and their care partners.

Gina Critchet is the Associate Dean for Finance and Strategic Analyst for the Nell Hodgson Woodruff School of Nursing at Emory University. In this role, she provides overall financial and strategic direction for the total budgetary and fiscal affairs of the school inclusive of planning, monitoring, and controlling the overall financial plans and policies.

Jasmine Hoffman is the Associate Dean for Enrollment and Communications for the Nell Hodgson Woodruff School of Nursing at Emory University. In this role, she is responsible for admissions, financial aid, student affairs, career services, marketing and communications.

She is an award-winning professional and has received numerous honors from the Public Relations Society of America, International Association of Business Communicators, Council for the Advancement and Support of Education, and the American Association of Colleges of Nursing. In 2010, she earned Emory University’s Award of Distinction—the highest honor for staff who have demonstrated professional excellence and service.

Dr. Im is currently the Senior Associate Dean for Research and Innovation and Edith Folsom Honeycutt Endowed Chair at Emory University, Nell Hodgson Woodruff School of Nursing. Dr. Im received a BSN with an honor (magna cum laude) and a MPH from Seoul National University in South Korea. She received her second Master's degree (MSN) from the University of California, San Francisco (UCSF), and finally a PhD in nursing from UCSF in 1997. She also had 1.5 years of postdoctoral study at UCSF. She has been an endowed chair/professor at the University of Texas at Austin (La Quinta Motor Inns Centennial Professor, 2007 to 2011), the University of Pennsylvania (Majorie O. Rendell Endowed Chair, 2011-2016), and Duke University (Mary T. Champagne Professor, 2016-2020). Also, she is the president of the Asian American/Pacific Islander Nurses Association (AAPINA; http://aapina.org/).

Dr. Im's most outstanding contribution to nursing is a research program that adopts Internet and computer technologies to eliminate gender and ethnic disparities. She has taken the lead in this burgeoning field, and her current studies are among the first of their kind to use these technologies to build nursing knowledge. She has also gained national and international recognition as a methodologist and theorist in international cross-cultural women’s health through more than 370 papers, abstracts, and chapters (over 185 refereed journal articles) and over 320 international and national multi-disciplinary presentations. Dr. Im has been on more than 50 research review panels of the NIH, and was a reviewer for the PCORI and the American Heart Association. Dr. Im is a senior editor of the Journal of Transcultural Nursing, is on the editorial boards of 8 journals including the Advances in Nursing Science and the Research in Nursing and Health, and is on 13 editorial review boards. She has numerous national and international awards, one of which is the 2014 International Nurse Researcher Hall of Fame Award from the Sigma Theta Tau International. In 2019, she received the Global Mentor Award from the International Network for Doctoral Education in Nursing for her work in mentoring international doctoral students and serving as a role model in doctoral education in nursing and research. Recently, she was appointed to the National Institute of Nursing Research (NINR) Advisory Council. Also, she was selected as one of the 2019 NINR Director's lecturers. https://www.ninr.nih.gov/newsandinformation/events/im-lecture

Dr. Im's program of research can be described as feminist-driven Internet research on gender and ethnic differences in health/illness experience of midlife women. Dr. Im's doctoral research and post-doctoral study focused on international cross-cultural women’s health research. Then, her work extended to oncology areas, and she developed Internet research methodology as an area of expertise. She further integrated this line of work with research projects on gender and ethnic differences in cancer pain, menopausal symptoms, and physical activity as the principal investigator through a series of NIH-funded, R01 awards. She has obtained about 17.5 million dollars of research funding through R01s and other grants (4 R01s as the PI and over 30 other grants as the PI).

Dr. Im’s dedication to teaching and mentoring a new generation of scholars is reflected in her efforts made to individually mentor more than 60 doctoral and post-doctoral scholars, 90 undergraduate students, and 70 research assistants (counting only since Sep. 2002). Also, her national and international invited lectures, presentations, book chapters, and service activities represent her efforts to raise a next generation of nurses and to make advances in nursing science. Dr. Im has taught courses on nursing theory, nursing philosophy, critical literature review, research methods, and global women’s health issues.

Kristy Kiel Martyn is a fellow in the American Academy of Nursing in 2013 and a board member of the National Organization of Nurse Practitioner Faculties (NONPF) board (2013–2015) and Qualitative Health Research, Global Qualitative Nursing Research, and Journal of School of Nursing; and she is a member of the National Association of Pediatric Nurse Practitioners (NAPNAP) Research Committee. Martyn and coauthors recently received writing awards: the 2014 Journal of Pediatric Health Care (JPHC) Leah Harrison Excellence in Clinical Writing Award for the article, “The Pediatric Nurse Practitioner Workforce: Meeting the Health Care Needs of Children” and the 2013 Journal of School Nursing (JOSN)/Sage Scholarly Writing Award for the article, “Improving Sexual Risk Communication with Adolescents Using Event History Calendars.” Martyn has a longstanding commitment to improving the health of adolescents through person-centered assessment and communication research. At the University of Michigan in Ann Arbor she developed a strategy for using the Event History Calendar (EHC) as a clinical history tool that is person-centered and could be adopted in a variety of clinical settings. She is the first researcher to adapt and apply the EHC to clinical settings, particularly with adolescents. Her NIH-funded research using EHCs revealed that the use of the EHC results in better adolescent-provider communication, with greater detail, better recall, and more accurate self-report. Both adolescents and providers have embraced the EHC because it improves communication; in addition, the process of completing the EHC, and reviewing it, has increased adolescents’ awareness of their risk behaviors. The findings from her research are remarkable in showing that EHC is notably effective and feasible. The use of EHCs is making a real difference in improving the quality of clinical communication with adolescents, a group that is often difficult to engage. As a leader in the use of EHC, Martyn has worked with more than forty researchers and health providers in more than thirty universities and clinical settings around the world to mentor the adaptation of EHCs in research and practice. Martyn received a PhD in nursing science at University of Florida, Gainesville, Florida in 1998.