We are now streaming the MSN Awards and Diploma Ceremony. Watch now as we honor these graduates. 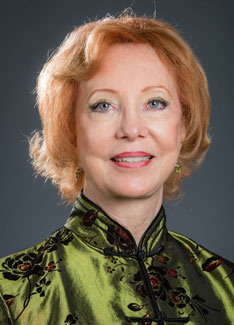 Deborah Watkins Bruner, RN, PhD, FAAN, is Senior Vice President for Research, Emory University, Atlanta, GA. Dr. Bruner is also Professor and Robert W. Woodruff Chair in Nursing, Professor of Radiation Oncology, and a member and past Associate Director for Mentorship at the Winship Cancer Institute. She is an internationally renowned researcher and clinical trialist with a focus on patient reported outcomes (PROs), symptom management, and comparative effectiveness of radiotherapy modalities. Her most current research is focused on the role of the human microbiome in carcinogenesis and cancer treatment outcomes.

Her global work includes a project to assist in preparing for opening the first modern radiotherapy in Ethiopia through 3D treatment planning and quality assurance. She is past chair of the advisory board for the Emory University School of Nursing-Addis Ababa University (AAU) partnership in developing AAUs first doctoral program in nursing and serves on dissertation committees for AAU nurses. Dr. Bruner serves on the board of the Center for Global Health Innovation, Atlanta, GA, and on the Georgia advisory committee of the U.S. Global Leadership Coalition.

Dr. Bruner’s leadership, especially in the National Cancer Institute (NCI) sponsored National Clinical Trials Network (NCTN) transcends disciplines and has led to improved health and quality of life and decreased cost outcomes for those treated for cancer. Recognition of her work led to her appointment by President Obama to one of only two National Institutes of Health Presidential appointed committees, the National Cancer Institute (NCI), National Cancer Advisory Board, on which she still serves. In 2021, in commemoration of the 50th Anniversary of the National Cancer Act, she was recognized among only 14 scientists in the area of cancer prevention and control as Champion and Changemakers. She is a member of the National Academy of Medicine and has co-authored several reports including most recently, Radioactive Sources: Applications and Alternative Technologies, and has served as a consultant to the Division of Human Health at the International Atomic Energy Agency, Vienna, Austria. Dr. Bruner has won numerous awards for research and mentorship. She has mentored nursing, psychology, epidemiology and medical junior faculty as well as pre- and post-doctoral students/fellows and has served as primary mentor for both nurses and physicians on 9 career development awards.

Dr. Bruner has worked for almost three decades with the NCTN and is the first and only nurse to ever lead a national clinical trials cooperative group, first as the Principal Investigator (PI) of the Radiation Therapy Oncology Group (RTOG) Community Clinical Oncology Program (CCOP), and currently as multi-PI of the NRG Oncology group National Community Oncology Research Program (NCORP). NRG Oncology was formed by the historic merger of The National Surgical Adjuvant Breast and Prostate (NSABP), the RTOG, and the Gynecologic Oncology Group (GOG) in March 2014. NRG is a consortium of over 1900 institutions and involving over 3,000 physicians, nurses, physicists, and statisticians, in the U.S. and Canada. The NCORP focuses on symptom amelioration, quality of life and comparative effectiveness trials in community settings, where most cancer care is delivered. Dr. Bruner’s pioneering leadership in the NCTN led to a paradigm shift from a historically medically dominated focus on survival and toxicity, to a patient-centered bio-behavioral focus that includes patient reported outcomes (PROs) and has changed clinical practice. She also currently serves on NRG Oncology’s Executive Committee.

Dr. Bruner earned her PhD in Nursing at the University of Pennsylvania in 1999 and has been continuously funded since 1998 from sponsors including the American Cancer Society, Department of Defense, Oncology Nursing Society, State of Pennsylvania, National Institute of Nursing Research, National Cancer Institute, and the National Institutes of Health. This has culminated in her ranking among the top 5% of all NIH funded investigators in the world since 2012, according to the Blue Ridge Institute. Follow Dr. Bruner on Twitter @DeborahBruner1.

Dr. Bruner has published over 160 peer-reviewed journal articles. She has served as editor-in-chief of one book and three editions of an ONS Guidelines Manual for radiation oncology nursing. Her articles have been published in a number of leading journals including the Journal of the America Medical Association, the New England Journal of Medicine, theJournal of Clinical Oncology, International Journal of Radiation Oncology, Biology, Physics and Cancer and the Oncology Nursing Forum.

Dr. Bruner’s program of research focuses on patient reported outcomes (PROs) and symptom management across cancer sites with a focus on pelvic tumors, preferences and utilities and comparative effectiveness for cancer therapies, and health disparities in recruitment to clinical trials. Her most recent work is in the microbiome and cancer incidence, progression and symptoms.  Her methodological work in PRO development and value added of PROs in clinical research, and her work in sexuality after cancer, are internationally recognized as demonstrated by her national and international invitational lectures and panel participation. Dr. Bruner is the only nurse to be awarded a grant from the National Cancer Institute to lead a large interdisciplinary team, first as Principal Investigator (PI) of a national cancer institute sponsored clinical trials cooperative group, the Radiation Therapy Oncology Group (RTOG) Community Clinical Oncology Program (CCOP). RTOG merged into a larger group, the NRG Oncology and she now is PI of the group’s National Community Oncology Research Program (NCORP). Dr. Bruner’s research in RTOG led to a paradigm shift from a historically medically dominated focus on survival and toxicity, to a patient-centered, nurse led, bio-behavioral focus that includes PROs as primary or secondary outcomes in clinical trials. Dr. Bruner conducted the first PRO study in RTOG and found a disturbing discordance of up to 45% between patient and clinician reports of prevalence and severity of subjective symptoms.   Building on these data, Dr. Bruner has been developing methods and leading national efforts to incorporate PROs as standard measures in clinical trials for the past 25 years.  Her work has provided the highest level I evidence for clinical practice guidelines.  For example, in a randomized trial of palliative RT for bone metastasis, she included a patient reported pain measure and found 1 8Gy treatment provided equivalent pain control to 10 treatments up to 30Gy.  There were no differences in objective narcotic relief or quality of life between arms with significant cost savings on the single treatment arm. Data from this trial was used in the Palliative Radiotherapy for Bone Metastases: An ASTRO Evidence-Based Guideline. Further, Dr. Bruner’s work correlated women’s report of sexual function after pelvic RT for gyn cancers with a novel measure of vaginal physiologic changes.  Changes in sexual function are one of the most prevalent, serious and understudied long term survivorship issues in these patients. The Vaginal Sound, developed by Dr. Bruner, is a reliable measure of vaginal length tested in a national study, and with it she reported on one of the few studies to quantify RT-related vaginal morbidity in women treated with vaginal brachytherapy (VBT) and correlate changes with PROs. She has documented that women treated with VBT have a shorter than normal vaginal length and that regular use of a dilator is significantly associated with a decreased risk for vaginal toxicity, but that adherence to dilator use is poor.  This led to her randomized trial assessing enhanced education/counseling for dilator adherence improvements by 20%. The body of this work has been used in evidence based guidelines for nurses in the Oncology Nursing Society, Manual for Radiation Oncology Nursing Practice and Education, and cited in the 2010 Cochran review of vaginal dilator use as well as in the International Guidelines on Vaginal Dilation after Pelvic Radiotherapy.